Healthier and More Diverse Options Take Off This School Year 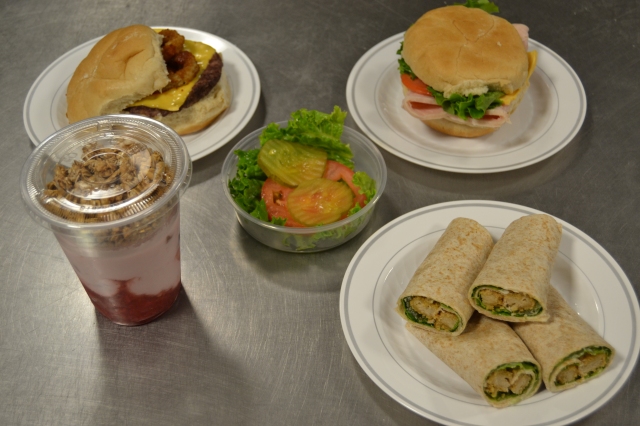 Some new additions to the menu include yogurt, spicy chicken sandwiches, salad, turkey sandwiches, and ranch wraps. “The students’ opinion and health are what I use in making changes to the menu,” Valencia said.

In order to raise student participation in the cafeteria, Matteo-Leon Valencia, the new kitchen manager, added new culturally diverse recipes to the school cafeteria’s menu in the beginning of the school year.

“In the past, our kitchen has had a reputation for bad food,” Matteo-Leon Valencia, the new kitchen manager, said. “We’re trying to change that by using feedback from students.”

ROP Chef Jackie Rosen collaborated with Valencia in order to figure out which recipes attract more students to purchase school food. Rosen’s culinary ROP class is required to sample cafeteria food and provide criticism on it, which is the reason why Valencia was able to add so many new successful items to the menu.

“As American is a closed campus, the cafeteria food should be popular, being students’ only option, but lately the student participation hasn’t been so high,” Chef Rosen said.

Valencia’s biggest concern when making a recipe is that the students won’t like it, which is why he began to consider students’ backgrounds when diversifying recipes.

“From the opinions of the ROP class and the cafeteria’s history, it was clear that our menu had a disproportionate amount of Mexican foods.”

Despite the extremely varied cultural demographic at American, Valencia thinks there aren’t many diverse options on the menu, which defers students from purchasing cafeteria food. However, with new recipes this year such as Thai chicken, Hawaiian pizza, barbeque chicken pizza, ranch wrap, and other items, Valencia hopes to relate to students’ palette more.

“ I try to look at whatever’s mainstream and make a healthy version of it,” Valencia said. “For example, we started using foil wrappers for burgers because that’s what other fast food chains are doing.”

Another challenge that Valencia faces is sneaking nutrition into the foods while still keeping them tasty. For instance, he has eliminated enriched flour from the menu, and now, his biggest challenge is making whole grain foods popular. Because students aren’t inclined to eat healthy on their own, they are required to take small packets of vegetables. In addition, rice and vegetables are incorporated into the new patties. Lastly, soy milks were introduced in the speed line to provide other healthy alternatives for drinks.

With the help from the ROP culinary class, Valencia believes these changes are well received. He encourages students to come try the new foods and provide honest input.

“Since the school is a closed campus, our cafeteria will bring the variety to our students,” Valencia said.