At the beginning of the week of May 10 to 16, senior Garima Raheja noticed that she could not find her white, metal water bottle with red curved lines, a present from her father, Naresh Raheja.

“A nice HydroFlask bottle was given as a free gift to all the attendees of our company’s annual client conference–it was held April 14, 2014 at the Gaylord Resort in Washington, D.C.–I attended that event and got that bottle, so the DC trip was worth it!” Mr. Raheja said. “Garima started using that bottle to enjoy chilled water during her tennis classes, sometimes in the fall of 2014, and then soon it became a permanent part of her lunch packet!” 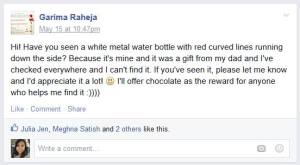 On May 15, without luck, Garima Raheja posted on the “American High School!” Facebook group to ask for help, providing a description of the water bottle and offering a reward for its return.

The tweet was not followed by any governmental action to locate the bottle. Given the water bottle’s sentimental value and functionality, the loss was not easy for Raheja.

“I thought very highly of it,” Raheja said. “It was tall. I thought it was very convenient because it kept my water cold and it wasn’t that heavy. I always put my water bottle in the side pocket and [water bottles] always fall out and get really dented, but this one didn’t dent. And when it fell, it made a very deep sound–not a shrill one, so not as many people would turn to stare.” 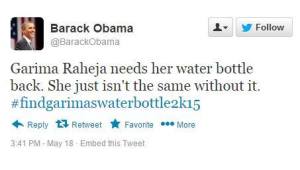 “I feel that it’s a tragedy,” Chiou said. “Obviously, Garima values her water bottle very much. She has quite a few of [water bottles] too, but this one was special, you see, because it was specially customized. You can’t get it anywhere else. I really hope that some good samaritan will find it and return it to her.”

For Bicakci, the missing water bottle took on a political meaning.

“It’s a loss that will impact our country for years to come,” Bicakci said. “And I hope the legislation will take things seriously, try to get on a solution. The American people, we have civic duty to look out for other people’s water bottles. I trust the American public to retrieve the water bottle, and I think active citizens like Garima will get the proper rewards in this economy.”

Chiou and Mr. Raheja formed different hypotheses as to where the water bottle was hidden.

“To be honest, Garima just probably left it somewhere on the table [or] on the ground,” Chiou said. “So, I think we’ll just find it in a random place. Watch it be at her house.”

In contrast, Mr. Raheja predicted that the water bottle was left in a car. However, both Chiou and Mr. Raheja were assured that, in time, it would be found.

“I think it could be somewhere in the car of one of her friends or carpool partners,” Mr. Raheja said. “Perhaps Garima can volunteer to help them (and herself) when they happen to clean their car next time! Or, she can simply wait and hope for the best (it may be her preferred option). I am sure the bottle will eventually be found, and returned back to Garima–it may be too much of a pressure for someone to use ‘Garima’s bottle’ (with her dad’s company logo on it).”

Neither hypothesis was an accurate portrayal of the reality; the search for the bottle came to an end on June 2 when Raheja came upon her water bottle in her bag.

“I took out my paper Raley’s bag that has tablecloths and candles for spontaneous food parties in hallways outside Theatre 70, Econ, and French; and I saw that underneath the tablecloth, there was a water bottle,” Raheja said. “The reason I saw it was because we were taking out all the stuff that was going to go bad and we were going to keep the rest in class, so I found it. I screamed, and it was during Cassandra’s Econ final. And so I screamed and she screamed with me!” 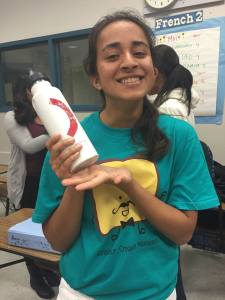 Raheja was elated and immediately began to plan time with her bottle.

“I feel great,” Raheja said. “I feel a sense of relief and serendipity. In the future, I would like to go on vacation with my water bottle. My water bottle needs a little break. I also want to introduce it to my new bottle, the pink one that I got, because my dad’s HR person felt bad for me. And I would like the story to be known and inspire other people who have lost their water bottles because it can be found! It’s in you; it’s in your locker!”

Although also excited about the bottle’s return, Bicakci warned Raheja of consuming “crusty water,” a term she coined herself.

“It all began when Garima found her bottle, which had been sitting out for hella days, which naturally makes the water soak up the crusty bottle flavorings and it gets hella nasty,” Bicakci said. “She attempted to drink the contaminated water, which is when the term ‘crusty water’ was born. It just means old-af water; I don’t know why y’all threw a fit about it. Anyway, apparently she had never experienced crusty water before. Some people have it easy, I guess. Allegedly her mom is washing it out now, so the water should taste okay in the future.”

“I still prefer my old water bottle because I will not let my faith be shaken by Bikakles,” Raheja said.