American High School has a considerable lack of attention for student nutrition. It hasn’t been neglected per se, and it certainly isn’t at its worst, but it’s been pushed to the side as a less significant issue. Its importance is often overridden by other academic, art, or sports-related factors, when in reality, a student’s dietary habits hold so much more value than what the school accredits it for.

But as nutrition waits by the sidelines, Culinary Arts teacher Chef Rosen decided to call attention to it once more. She used her experiences as a professional chef of twenty years to personally explain to her students the global responsibility of maintaining a healthy diet.

“Talking about nutrition and doing it are entirely different,” Rosen said. “There’s this disconnect we have from food; people should know that with the right nutrition, students can reach their optimum capacity. I noticed that students’ moods tend to improve a lot in my class, which has to do with the correlation between the foods they eat and their moods.”

Alongside bringing this awareness to her own students, Rosen noted that she and the Culinary Arts 2 class organized a presentation in hopes to get the school to recognize just how important nutrition is. Their aim is focused on not just the students at American High School, but their parents, the cafeteria, and the district.

“We want to start some informal discussions that talk about why students don’t eat and what they do eat,” Rosen said. “We’d start off with a general awareness, but this needs to be a community driven demand. I want to push the district to improve the student body, and while there are a lot of obstacles, they’re not insurmountable.”

According to Rosen, she couldn’t believe that many students wanted to commit to the social change. Some of the more ardent individuals like senior Griffin Thompson found themselves to be highly involved with the issue. 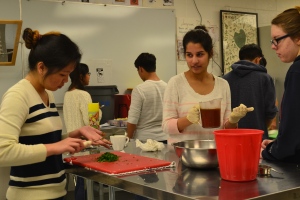 “I’m really passionate about making sure this change happens because I know that students as well as staff members deserve fresh food that is worth the purchase,” Thompson said. “I hope that my class can get the support of the other students as well as the parents to understand the importance of a healthy lunch and how it will affect the students. It’s a great opportunity for us to actually have the chance to make a change in the school.”

While the initial proposal will be introduced as a general concept, the team developed numerous ways to improve the school lunch system and its nutrition. Some ideas ranged from a serve-yourself salad bar to passing out samples of the food that is sold, or adjusting the ingredients to a more plant-based diet. There was also talk of a few bigger hypothetical concepts that spread more awareness, like a National Food Day festival to culminate people’s knowledge about where food comes from, or possibly an emulation of a farmers’ market on campus.

“Even changing just one or two entrees would be good,” Rosen said. “We’ll start off with a slow change, maybe suggesting a few menu items per month and fixing a few things for now. I didn’t want to speak out of line with this proposal, but it felt safe to bring up the changes this year. If the students see value in these changes, I’ll do what I can to try to get it on the table to help them get what they need. If they request change, the system needs to come up with viable answers.”

For the time being, the proposals will remain indefinite. However, one of the district’s child nutrition supervisors, Allison Mayer, mentioned that she welcomed the students’ opinions. With a duty to serve the students, Mayer emphasized that nutrition can constantly be improved.

“I believe that students should voice their opinions if they want to change something,” Mayer said. “If they want to improve our department, we first need to hear and understand what is being asked. I believe everyone wants what’s best for the students, and as long as we have open communication, all parties will be in support of their ideas.”

“We will be testing tablets at a couple of high schools to increase the number of lines available to purchase meals with fruits and vegetables throughout the campus,” Mayer said. “We’re also creating recipes to improve the food quality, and have dietetic interns working with us to develop nutritional education programs.”

This gradual process, while not the fastest call to action, continues to grow in support. Due to Rosen’s experience as a chef in varying environments, her observations gave her and her students the determination to adhere to the commitment.

“There’s more flexibility in serving food outside of the school, and while I’m not sure if we have it here, it proves that it can work outside,” Rosen said. “It can be done. Health is important, not a burden. I know things used to be much simpler, but if we could do it then, why can’t we do it now?”