The meant-to-blend pattern stands out around American High School

Camouflage, that used to be worn only by military troops, has taken over student’s closets all around school. From camo shorts to camo shoes, this new trend took off fast and there is no hiding from it.

The graphic nature of the camouflage print is very eye-catching but also implies a causal quality at the same time. Both men and women can be seen wearing camouflage. Camo is anything but camouflaged right now.

“I picked camo up off the sale rack at Urban Outfitters at the beginning of last year because I thought it was cute,” junior Myrissa Pinnaula said.

Camouflage has always been around but has increasingly become popular. Adding a flash of color or a golden necklace and combat boots can complete the look.

“I wear camouflage with black pants,” senior Morgan Ramee said. “I’ve even worn it with a maroon beanie.”

Camo has been around for centuries but it has recently picked up popularity. 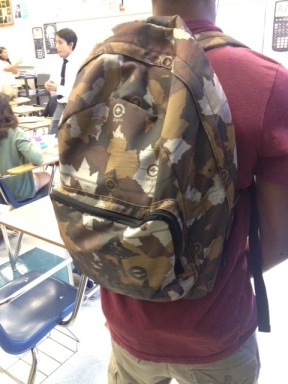 “I started wearing camo around last year,” junior Mateo Roberts. “I really like it and I think the trend is cool.”

Camouflage is very graphic, yet edgy but also a completely neutral pattern. It can make a regular school outfit to a whole new level.

“At first I wasn’t really feeling the camouflage trend but then I realized how it can change an outfit completely,” senior Kylee Cooksey said. “I love how many different styles you can go for with camouflage along with the things you can pair it with for an interesting look every time.”

The beauty of camouflage is that it dresses up and dresses down. Camouflage can be as urban or as country as people want to make it.